The Major League Soccer (MLS) 2O20/21 has ready produced some moments of magic. So far, several players have been shown remarkable improvements not to mention that contenders for the 2022 MVP are already making headlines. With Less than ten games to go, New England Revolution is ten points clear at the top. However, the competition remains stiff with the top five teams still in contention for the top spot. At the moment, the top scorer chart is still difficult to conclude even though DC United forward, Ola Kamara leads with 16 goals followed by Ruidiaz of Seattle Sounders with 14 goals. Other notable top-rated scores in the MLS so far include Gustavo Bou of New England Revolution, Valentine Castellanos of New York City, Javier Hernandez, Ricardo Pepi, and many others.

However, top scorers will not necessarily become automatic MVP players of the year in MLS. Several other players who have made significant contributions to their respective teams could very well bag the individual award. It brings us to the big question. Who will make it to the top 10 MLS players this season? Let’s explore the best prospects in this post.

At the onset of the new MLS season, most bookies thought New England Revolution midfielder, Carles Gil, was nowhere close to bagging the MVP this year. However, the 28-year-old has shown a tremendous improvement, thanks to his exceptional playing-making capabilities. He is now among the best players in MLS. The left-footed player joined New England Revolution from the Spanish side, Deportivo La Coruna. He also played for Aston Villa, Valencia, and Elche CF. Carles Gil has registered 12 assists so far this season and there could be more. But things could become even more competitive with CF Montreal’s midfielder; Djordje Mihailovic having 12 assists so far. Jack Price of Colorado Rapids has 9 assists, further making the top assist chart a far call at the moment. 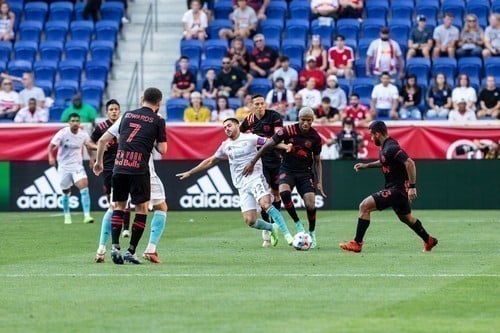 Since joining Seattle Sounders from Liga MX side Mazatlan FC back in 2016 in a deal worth 6.4 million Euros, Raul Ruidiaz showed why he deserves the number 9 shirt. The Peruvian has started 21 of 23 games, which shows just home important he is for the team. He averages a scoring frequency of 139 minutes and has found the net 14 times since the season. While Raul Ruidiaz is not MLS's top scorer so far, the Peruvian is currently among the top contenders for MVP. He has played a significant role in keeping his team competitive despite many injuries that have plagued the Seattle Sounders squad. He is the frontrunner of this year’s goal of the season award and so, a top individual award such as MVP will only be an icing on the cake.

Sporting Kansas currently tops the Western Conference League, However, with only a point above Seattle Sounders. Daniel Salloi has been a key player for Sporting Kansas this season. The striker has 13 goals with eight games to spare. At only 25 years of age, the Hungarian international is set for the top, and potentially, MVP in MLS this season. Scoring 9 goals in 16 games has been an incredible feat for the player who only managed 25 goals in his last 105 games before this season.

Gustavo Bou is New England Revolution is another player in contention of the MLS MVP this year. The 31-year-old Argentine is also locked in the race for Golden Boot in the MLS this year. With only 7 games left to play, Gustavo Bou is not only among the top 10 MLS players likely to bag the top scorer award but is also in contention for the MVP alongside a teammate, Carles Gil. Gustavo Bou has 12 goals, only four behind the top scorer Ola Kamara.

Ola Kamara is currently the top scorer in MLS 2021 season, a feat that puts him right in the middle of players set for the MVP or Golden Boot. While he is not among the soccer legends playing in the MLS, many pundits would not have predicted that a 31-year-old would be leading the scoring chart at this point. The Norwegian wears the number 7 jersey at DC United and has provided three assists. With eight games to play before the season ends, there is always a good chance more goals could be forthcoming for Ola Kamara.

Ola Kamara can bag the golden boot if he keeps scoring even though everything looks right now. The Norwegian is also phenomenal at the international level for his country, having scored 7 goals in 17 appearances for Norway. His first game for the national team was in October 2013. He averages a passing accuracy of 76%. The fact that Ola Kamara has neither picked a yellow nor red card in 19 games he has played so far makes him an outstanding prospect for the MVP award.

Nani is rated highly among the soccer legends playing in MLS this season. The Portuguese has been instrumental for Orlando City SC, especially this season, and is in contention for the MVP award. While Nani kicked off the season on a low note during which he was given a two-match ban after scoring thrice in the first four appearances this year, Nani has nine goals with eight games to spare.

Nani is also ranked among the best in assist charts. He provided 7 assists alongside his 9 goals, making him one of the most valuable players in the MLS this year. Orlando City SC is currently 8th on the MLS table after 25 games and 4th on the Eastern Conference table. Moreover, the 34-year-old is currently the best-rated player for Orlando City SC. He is also the top scorer for the team. The second-best scorer for Orlando City SC is forward, Benji Michael, a gap that shows just how phenomenal Nani has been this season. There is no doubt that more moments of magic in the remaining fixtures will edge Nani closer to bagging the MPV Award this season.

LA Galaxy forward, Javier Hernandez alias Chicharito is also poised for the top players in MLS who also played in the EPL in the past. Earlier in the season, most pundits had fronted the Mexican for the Golden Boot and potential, MVP in MLS this year. While the former Manchester United player scored only twice in his MLS debut season in 754 playing minutes, he has been remarkable in the new season. In the 2021 MLS season, Chicharito has bagged 11 goals in 13 games, an impressive record that puts him among the best in the league this season.

The best of Chicharito this season was a hat trick against the New York Red Bulls in April. He also scored a brace against San Jose Earthquakes in June. However, Javier Hernandez has provided only one assist, a record that almost rules him out of the top assists chart.

Seattle Sounders was unlucky last season when he missed the newcomer of the Year Award. However, the 3-year-old midfielder has been exceptional for the Sounders. He has played 23 games and started 21, during which the Brazilian has provided seven assists. Moreover, Joao Paulo has netted twice this season. The fact that the midfielder averages 80.4 touches per game so far makes him one of the most influential in MLS this year. Moreover, Joao Paulo has created four big chances. The player joined Seattle Sounders from the Brazilian side, Botafogo. He previously plied his trade at Santa Cruz, Internacional, Goias and Atletico Goianiense.

New York City FC, Valentine Castellanos almost makes it to our top ten of the best players in MLS this season. Castellanos joined New York City FC from Uruguay's Montevideo City Torque. The player's influence on the team has been phenomenal, providing 7 assists in 23 games. He has 12 goals so far and was a starter in all 23 matches. Valentine Castellanos has been one of the most accurate passers in the league. He averages 70% in passing accuracy. While he has missed 18 big chances, he tops the scorer chart in New York City FC followed by Paraguayan, Jesus Medina. Ismael Tajouri-Shradi is also another top player for New York City after scoring seven goals in 21 games.

Ricardo Pepi closes our top picks for top ten players in MLS this season. Ricardo Pepi plays as a forward for FC Dallas. At only 18 years old, the US national is among the favorites to lift the young player of the year in the MLS this season. Pepi joined FC Dallas from North Texas SC in November 2020. He has been phenomenal both at the club and national level. In 24 games, Ricardo Pepi has netted 12 times and provided two assists. For a player as young as Ricardo, the future looks bright. Moreover, these stats put him at the center of competition for a top contender for the MVP this year. but also in the years to come. He only needs to keep the tempo going. He averages 78% passing curacy this season even though he has missed 7 big chances so far.

The legacy Bob Bradley left behind at LAFC

MLS Expansion Draft News – All you need to know

Could Cristiano Ronaldo soon end up in MLS?

How does the MLS work? The MLS league format explained

A Look at Zlatan’s Impact on the MLS

10 Former EPL Players who played in the MLS

Highest paid soccer coaches in the world – the true scope

Highest Paid Soccer Players in the world: Who are the richest?

The World’s Most Famous Soccer Players: Five of the Greatest